Finding the Human in the Homelessness Crisis 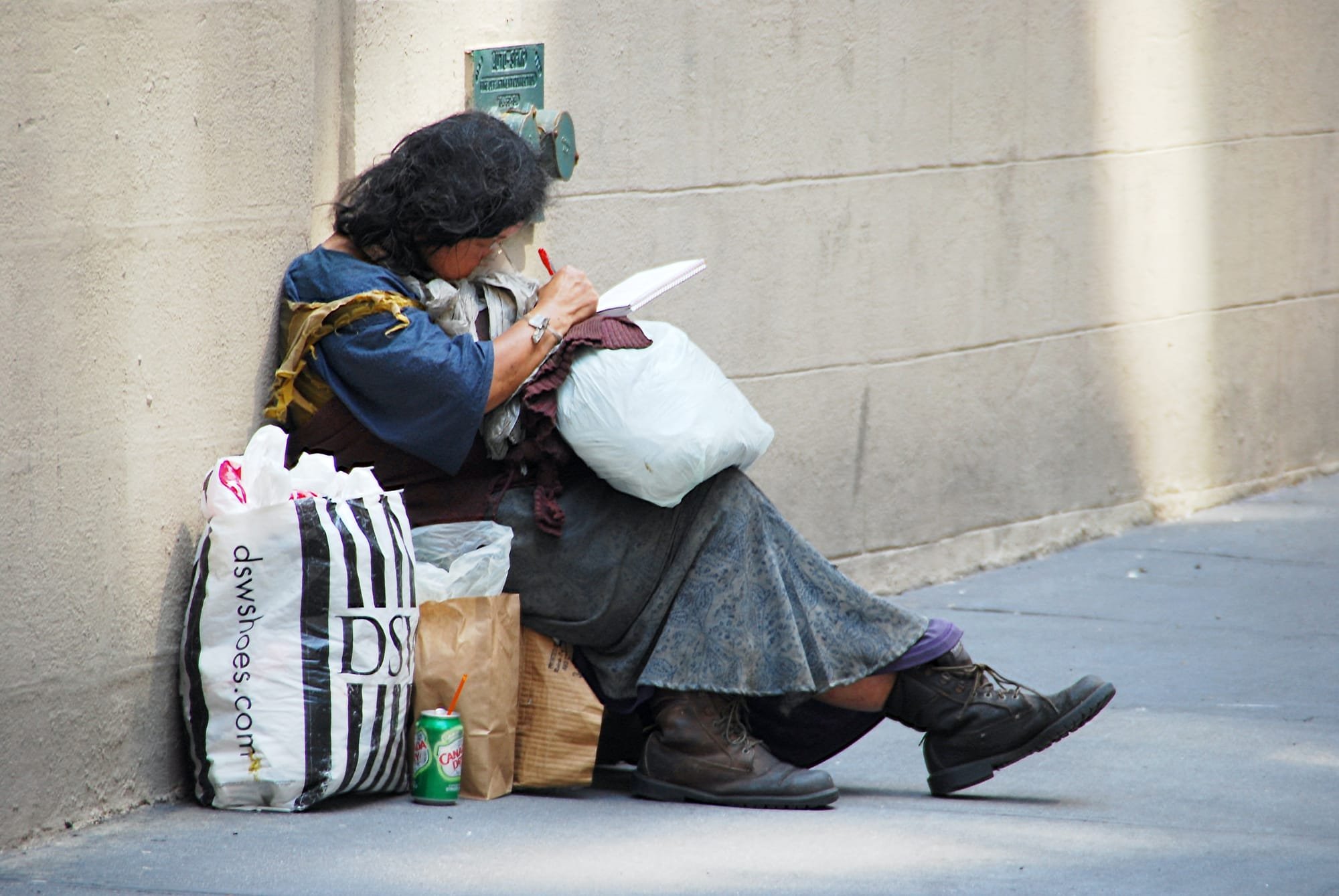 On an early evening in July, I was walking home from a day of shopping when I passed a woman sitting on the side of the street at the corner of 7th Avenue and West 44th Street. “Can I please have something to eat?” She said loudly to passersby.

Like everyone else, I continued to walk. It was getting late, Times Square was particularly rowdy, and unfortunately, it isn’t like hungry women lying on the sidewalk are an uncommon sight in New York City.

I stopped at the crosswalk at 7th and West 39th. The sign switched to signal that it was okay to cross, but I couldn’t move. The woman’s voice kept replaying in my head:

It was strange. I walk past countless homeless people every day, each with the same or a similar message. Every now and then I stop and offer food or money, but most of the time I keep walking, with nothing more to give than a murmured “I’m sorry.”

I turned around and walked back to the corner of 7th Avenue and West 44th Street, my feet moving faster than my brain could process what I was doing. There she was, sitting in the same spot with the same refrain.

Her name was Rashida. She had long, black, curly hair, light-brown skin, penetrating brown eyes, and an infectious smile even sans her two front teeth. I later learned that she had a son who lived in the Bronx and that she had been living in a nearby homeless shelter for the past two years.

My original plan was to get Rashida something quick and convenient. I walked over to a small taco stand that was cash-only.

I walked back. “What’s your favorite kind of food?” I asked her.

“My favorite food in the whole world is chicken parmesan. I don’t remember the last time I had it!” She answered promptly.

I decided to take Rashida to a quaint Italian restaurant a few blocks away. During the brief walk to the restaurant, I learned a lot about Rashida and what life as a homeless person is like in New York City. For one thing, Rashida had friends—people would sporadically come up to us and ask if she’d be at the card game later that evening. Another woman asked her about bingo night.

This was striking to me. A whole subterranean community exists, one that goes largely unnoticed by millions of city residents. Manhattan is a place of perplexing dichotomies. It encapsulates the best and worst of the hyper-globalization of the 21st century: alongside the dazzling benefits of higher outputs of productivity and innovation lie increased wealth disparity, gentrification, and locational displacement, all of which are directly linked to homelessness.

Rashida told me she had never eaten in a restaurant before, so I insisted that we get a table. She ordered the chicken parm and we each had a peach Snapple.

Rashida suffered from the two leading causes of homelessness: addiction and mental illness. Despite the advent of antipsychotic medications in the mid-1900s—which kick-started the deinstitutionalization process and provided treatment for once untreatable disorders—people with mental illness remain an uncanny percentage of the homeless population. And Rashida was open with me about her experiences with drug use and childhood trauma. She first injected herself with heroin at 26 years old, when her mom died, and had been using ever since.

Rashida’s story is not anomalous. The path to homelessness is surprisingly linear: some combination of mental illness and a distressed, abusive, or socially isolated childhood that culminates in substance abuse. The homeless are society’s most misunderstood individuals. The first step to understanding who they are is understanding the societal conditions that caused them to end up addicted, alone, and, eventually, homeless.

In 1981, Dr. Bruce Alexander, a Canadian psychologist at Simon Fraser University, published a famous study on addiction called Rat Park. The study set out to reexamine the notion that the cause of addiction resides in the power of drugs over the brain, and that drugs were irresistible to anything that tried them. Previous studies on addiction, like most other studies during the time period, housed rats in a solitary confinement apparatus known as a Skinner Box, with nothing inside to make life meaningful for the rats. Alexander wanted to test what if any effect the isolated conditions of the rats had on their desire to use drugs.

For the study, Alexander set up two realities. One was akin to the isolated conditions of the Skinner Box, and the other was a large enclosure with rats of both sexes, fitted with things like tin cans and tunnels for hiding and running wheels for exercise. The experimenters dubbed this “Rat Park.” In both setups, the rats had access to two dispensers: one with a morphine solution and the other with an inert solution.

The results showed the isolated rats to consume substantially more drug solution, suggesting that drug use is not a result of the drug’s intrinsic addictive quality but rather is a response to social isolation. When a social creature’s basic psychological needs are met—when animals are in their natural environment—they have virtually no desire to numb themselves with drugs. With Rat Park, the idea that the seductively addictive quality of drugs was the cause of substance abuse went out the window—as did the principle argument for the War on Drugs. The solution to addiction, it turns out, isn’t criminalization—it’s connection.

One of many historical parallels to Rat Park is the addiction trends noted in soldiers during the Vietnam War. According to the National Academies Press, 20% of enlisted men had met the qualifications for being addicts after being deployed to Southeast Asia. Prior to deployment, fewer than 1% had been addicts. Then after the soldiers returned from Vietnam, opiate use amongst the soldiers dropped to at or below pre-service levels. As it turns out, when the psychosocial needs of the soldiers were met, the enlisted men didn’t use drugs. If the addiction had been caused from the heroin alone, the soldiers would have remained addicts even after the war ended and they returned home.

As the world continues to globalize and industrialize, people become less and less connected with friends and family—the very things that make life worth living. Less communal contact, more stress, more economic insecurity, and dependency on technology are hallmarks of life in the 21st century. We live in a world where people have 3,000 followers on Instagram and nobody to have dinner with on a Friday night. Finding meaning in the hubbub of living has never been more difficult.

Charles Darwin’s theory of evolution is often cited as anthropological evidence for unfettered individualism. Human beings are a selfish and self-serving species, the argument goes, and the ones with the most merits and the best instincts are the ones who survive. But that is only one leg of Darwin’s research into human behavior.

Darwin writes in The Descent of Man, his second publication, that instinctive altruism from an individual promotes survival for the tribe; humans, he said, have a genetic predisposition to “take pleasure in the society of its fellows, to feel a certain amount of sympathy with them, and to perform various services for them.” He goes on to say that social instincts are the “prime principle for a man’s moral constitution” and that the urge for social belonging is just as important in evolutionary history as the urge for individual gain. Darwin made clear that social integration is key to the human experience; it is hardwired into our species just as much as competition is.

In a quest for productivity, we have seemingly forgotten about the necessity for social contact. For some, particularly those with pre-existing mental illness or lasting scars from childhood trauma, the pleasures and community of life as an addict become more fulfilling than social exclusion. In simple terms, addiction becomes a substitute for human connection.

About a month after my encounter with Rashida, I walked past another homeless woman. She was sitting in the middle of the road drawing an intricate portrait of a young girl. Her sign had a simple message: “Please help me.” She was shaking.

I sat down next to her. This time, my perspective was different. I had already begun my research on the root causes of homelessness, and I saw her not as an addict but as a person with a complex story displaced by a system that deprived her of the basic need for human contact. Her name was Joanie.

“If you don’t mind me asking, who are you drawing?”

She dropped her pencil, cranked her neck up from the page, looked at me, and paused. “It’s my daughter.”

“You’re drawing from memory?” I asked.

“I haven’t seen her in three years. This is what she looked like the last time I saw her.”

Joanie and I talked on the corner of University Place and East 8th street about everything from her memories with her daughter to our favorite New York slice. Human beings are social and storytelling creatures. We share stories because that is what human beings do. As societies continue to globalize and industrialize, as technology strengthens its stranglehold on all facets of human behavior, real human connection will continue to fade away for pseudo-connectivity, corporate domination, and ruthless market competition that prioritizes profit over community. An absence of community is the direct cause of addiction, which is the direct cause of homelessness. While most of us aren’t legislators, there is something we all can do as New Yorkers: see the people we share the streets with, and engage with them as much as we can. Often, acknowledgment has more meaning than a few coins in a coffee cup.